Looking for Assassin’s Creed Mirage Collector’s Case & Deluxe Edition bonus digital and physical content, including Basim Figurine? We’ve got you covered! Mirage has been officially revealed! The next Assassin’s Creed game takes us to ninth-century Baghdad. There, we will experience the story of Basim, whom you probably remember from Valhalla. The new Assassin’s Creed game is returning to the roots of the series, with a bigger focus on sneaking and assassinations. If you are as excited as we’re, check out all Collector’s Case & Deluxe Edition content and differences. 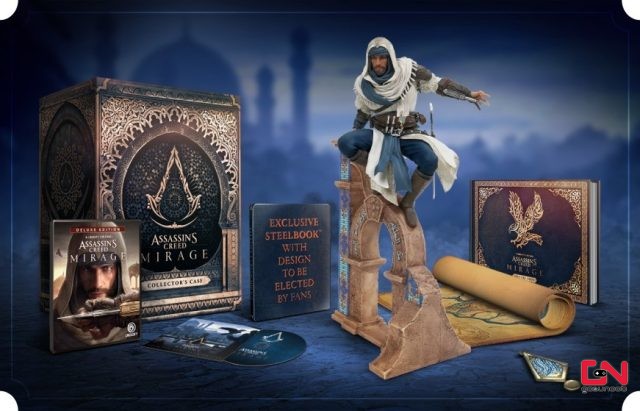 In Assassin’s Creed Mirage, parkour and stealth gameplay, the iconic parts of the franchise, will be at the core of the new experience. If the prospect of playing the original Assassin’s Creed gameplay tailored for a modern gaming experience gets you excited, then you are probably already thinking about pre-ordering the game.

The good news is that the game is already available for pre-order! You can pre-purchase Assassin’s Creed Mirage right now from the official Ubisoft store. And, you can choose between Standard Edition, Deluxe Edition and Collector’s Case. In this article, we detail all the content from different editions. Firstly, the standard edition comes with just a base game. Now, let’s check out what the other two editions have to offer.