Are you stuck on the NBA 2K23 Palace Intrigue quest in MyCareer? The “Palace Intrigue Not Progressing” glitch has been plaguing players who are trying to enjoy the MyCareer story mode. It’s almost a tradition at this point that NBA 2K games launch rife with issues, such as the “Going National” bug or “MyCareer no Salary” glitch. And now, players can’t finish the “Palace Intrigue” quest because the “Head to the arena and play your next game” step is bugged. Luckily, we have some solutions for you on how to fix this issue. 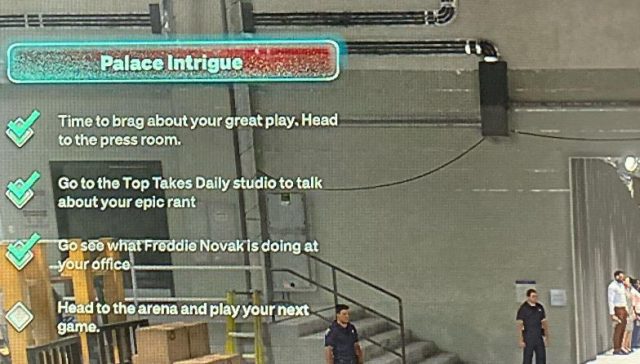 NBA 2K23 players have encountered a sea of glitches since launch. The one preventing them from progressing the “Palace Intrigue” quest seems particularly frustrating. Or, to be more precise, the final task: “Head to the arena and play your next game”. Namely, one step requires a teammate to grade B or higher. However, even if you get a teammate graded A, the game will still tell you that the objective has failed, and the Palace Intrigue quest will not progress..

Unfortunately, as with many bugs in NBA 2K23, there’s no clear workaround for this problem. Reddit user saltyFF305, one of the players who have encountered this problem, has offered their solution. According to them, they played “a couple of park games and restarted my Xbox and then went back and tried again and it started working”. Thus, for now, the best option you have is to play some park games and see if it works. Also, make sure to restart your PC/PlayStation/Xbox a couple of times. Hopefully, this should fix the “Palace Intrigue Not Progressing” issue.

Another issue players have with this buggy quest is that it completely freezes NBA 2K23. Namely, when players want to do the “Head to the Arena and Play Your Next Game” task, the game simply freezes, preventing them from playing the game. Unfortunately, this is getting them stuck on the Palace Intrigue quest, stopping them from continuing the main MyCareer quest.

If you are suffering from this glitch as well, we’ve found a few possible solutions offered by fellow gamers online. Reddit user u/jacobs0922 states that completing the Going National quest will eventually fix the issue. Another fan suggests that changing the clothes might fix the issue. For now, these are the only two solutions we have if NBA 2K23 freezes and you are stuck on the “Head to the Arena and Play Your Next” quest. If we find more potential fixes, we will make sure to add them to the article.