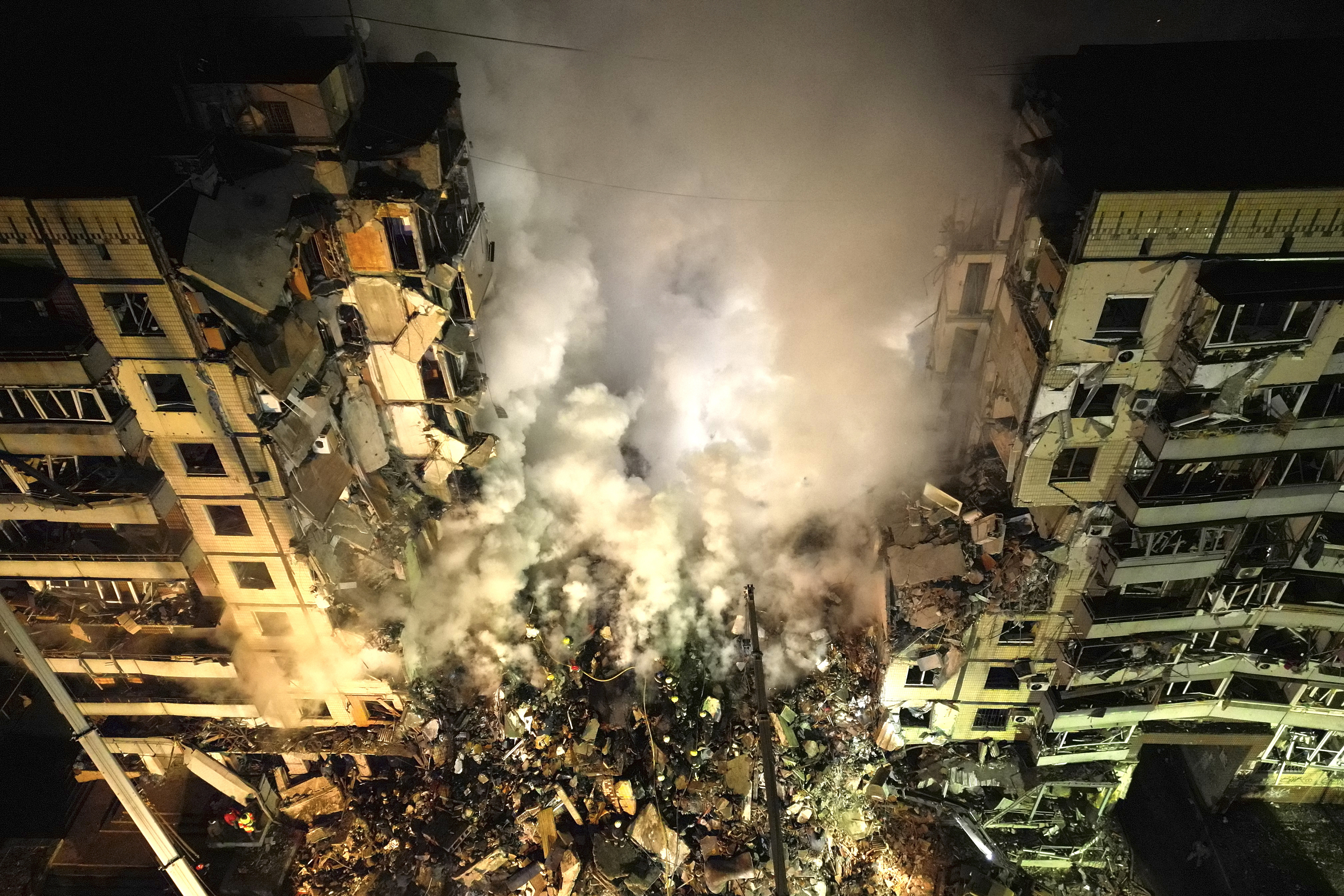 Russia on Sunday acknowledged the missile strikes but did not mention the Dnipro apartment building. Russia has repeatedly denied targeting civilians in the war.

Russia fired 33 cruise missiles on Saturday, of which 21 were shot down, according to Gen. Valerii Zaluzhny, the commander-in-chief of the Ukrainian armed forces. The missile that hit the apartment building was a Kh-22 launched from Russia’s Kursk region, according to the military’s air force command, adding that Ukraine does not have a system capable of intercepting that type of weapon.

In Dnipro, workers used a crane as they tried to rescue people trapped on upper floors of the apartment tower. Some residents signaled for help with lights on their mobile phones.

Ukrainian President Volodymyr Zelenskyy reported that at least 73 people were wounded and 39 people had been rescued as of Sunday afternoon. The city government in Dnipro said 43 people were reported missing.

“Search and rescue operations and the dismantling of dangerous structural elements continues. Around the clock. We continue to fight for every life,” Zelenskyy said.

Ivan Garnuk was in his apartment when the building was hit and said he felt lucky to have survived. He described his shock that the Russians would strike a residential building with no strategic value.

Dnipro residents joined rescue workers at the scene to help clear the rubble. Others brought food and warm clothes for those who had lost their homes.

“This is clearly terrorism and all this is simply not human,” one local, Artem Myzychenko, said as he cleared rubble.

Claiming responsibility for the missile strikes across Ukraine, Russia’s Defense Ministry said Sunday that it achieved its goal.

“All designated targets have been hit. The goal of the attack has been achieved,” a ministry statement posted on Telegram said. It said missiles were fired “on the military command and control system of Ukraine and related energy facilities,” and did not mention the attack on the Dnipro residential building.

On Sunday, Russian forces attacked a residential area in the southern Ukrainian city of Kherson, regional Gov. Yaroslav Yanushevych said in a Telegram post. According to preliminary information, two people were wounded.

Russia’s renewed air attacks came as fierce fighting raged in Ukraine’s eastern Donetsk province, where the Russian military has claimed it has control of the small salt-mining town of Soledar but Ukraine asserts that its troops are still fighting.

If the Russian forces win full control of Soledar it would allow them to inch closer to the bigger city of Bakhmut. The battle for Bakhmut has raged for months, causing substantial casualties on both sides.

With the grinding war nearing the 11-month mark, Britain announced it would deliver tanks to Ukraine, its first donation of such heavy-duty weaponry. Although the pledge of 14 Challenger 2 tanks appeared modest, Ukrainian officials expect it will encourage other Western nations to supply more tanks.

“Sending Challenger 2 tanks to Ukraine is the start of a gear change in the U.K.’s support,” British Prime Minister Rishi Sunak’s office said in a statement late Saturday. “A squadron of 14 tanks will go into the country in the coming weeks after the prime minister told President Zelenskyy that the U.K. would provide additional support to aid Ukraine’s land war. Around 30 AS90s, which are large, self-propelled guns, operated by five gunners, are expected to follow.”

Sunak is hoping other Western allies follow suit as part of a coordinated international effort to boost support for Ukraine in the lead-up to the 1-year anniversary of the invasion next month, according to officials.

The U.K. defense secretary plans to travel to Estonia and Germany this week to work with NATO allies, and the foreign secretary is scheduled to visit the U.S. and Canada to discuss closer coordination.