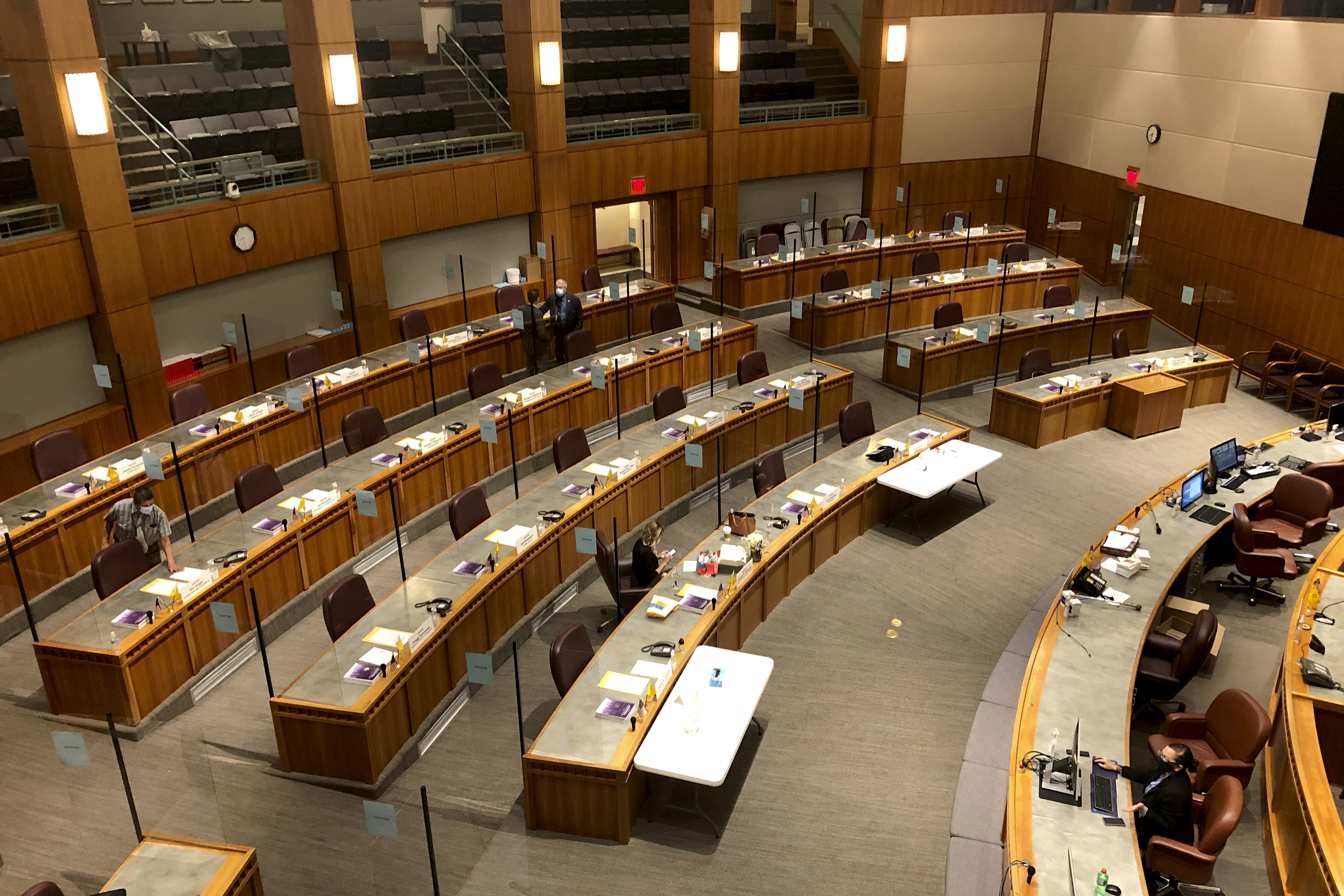 The criminal complaint against the self-proclaimed “MAGA king” describes how anger over his landslide defeat in November led to attacks at the homes of four Democratic lawmakers in New Mexico’s largest city. A SWAT team arrested him Monday afternoon, police said.

Peña spent nine years behind bars after his arrest in April 2007 for stealing electronics and other goods from several retail stores as part of what authorities described as a burglary crew. He was released from prison in March 2016, and had his voting rights restored after completing five years probation in April 2021, corrections officials said.

Peña, whose criminal past came up during the campaign, repeatedly made baseless claims that the election was “rigged” against him.

“I dissent. I am the MAGA king,” he posted the day after the election.

On Nov. 15, he posted an image of himself in a “Make America Great Again” hoodie, saying “Trump just announced for 2024. I stand with him. I never conceded my HD 14 race. Now researching my options.”

Peña has an initial court appearance Wednesday on charges including multiple counts of shooting at a home and shooting from a motor vehicle, aggravated battery with a deadly weapon, conspiracy and being a felon in possession of a firearm.

No one was wounded in the drive-by shootings. The New Mexico Republican Party said that: “If Peña is found guilty, he must be prosecuted to the full extent of the law.”

Peña’s candidacy was challenged in state district court, with his opponent saying he wasn’t eligible to seek office because he had not been pardoned by the governor, nor did he request to be pardoned.

The court sided with Peña, finding that a state law that prohibits a felon from holding public office was unconstitutional. An appeal is pending.

Police said Peña had previously shown up uninvited at the homes of two elected officials with what he claimed were documents proving that he had won his race. There was no evidence of widespread voter fraud, or any irregularity involving enough votes to change a result, in New Mexico in 2020 or 2022.

The criminal complaint says that Peña hired a father and son with criminal histories of their own as well as two brothers whom authorities have yet to identify. In one of their text messages, Peña complained that officials certifying the election in November “sold us out to the highest bidder.”

The final related shooting, targeting state Sen. Linda Lopez’s home, unfolded in the midnight hour of Jan. 3. Police said more than a dozen shots were fired, including three that Lopez said passed through the bedroom of her sleeping 10-year-old daughter.

The witness said one of the men told the shooters to aim above the homes’ windows to avoid striking anyone inside. Peña wanted them to shoot lower.

Peña’s insistence that the men be more aggressive made the other participants uneasy “since they knew that doing so would likely end in death or injury,” said the witness, who faces criminal charges and has asked for leniency. Authorities said no such promises have been made.

The witness said Peña was there at the Lopez shooting “to ensure better target acquisition.”

The witness said Peña’s gun jammed and did not fire correctly but one of the other men fired multiple rounds from a Glock pistol into the Lopez home.

An appointed public defender for Peña did not immediate return messages seeking comment.

The shooting spree was “scary, not just from my personal perspective, but the fact that our democratic processes that we believed so much in — and that our country was founded on — would be targeted in that way,” Martínez, the Democratic lawmaker, said at a news conference on his first day as the top-ranked House leader.

“It’s long overdue that we lower the temperature. These are the things that can happen when the rhetoric gets out of hand,” Martínez said.

Lawmakers in the Democratic-run state have had to tread carefully over the years not to infringe on the right to bear arms, and it was only recently that firearms were banned from the state capitol. In Albuquerque, authorities have been struggling to address escalating gun violence and consecutive years of record homicides.

Detectives identified Peña as their key suspect using a combination of cellphone and vehicle records, witness interviews and bullet casings collected near the lawmakers’ homes.

Technology that can detect the sound of gunfire led an officer to Lopez’s neighborhood shortly after the shots were fired.

The officer found bullet casings matching a handgun found later that morning in a Nissan Maxima registered to Peña. Around 1:30 a.m., about an hour after the shooting at Lopez’s home, police stopped the Nissan about 4 miles (6 kilometers) from the lawmaker’s neighborhood.

The driver, identified as Jose Trujillo, was arrested on an outstanding warrant, leading to the discovery of more than 800 fentanyl pills and two firearms in the car.

Authorities said Tuesday the investigation was ongoing and more arrests were expected.