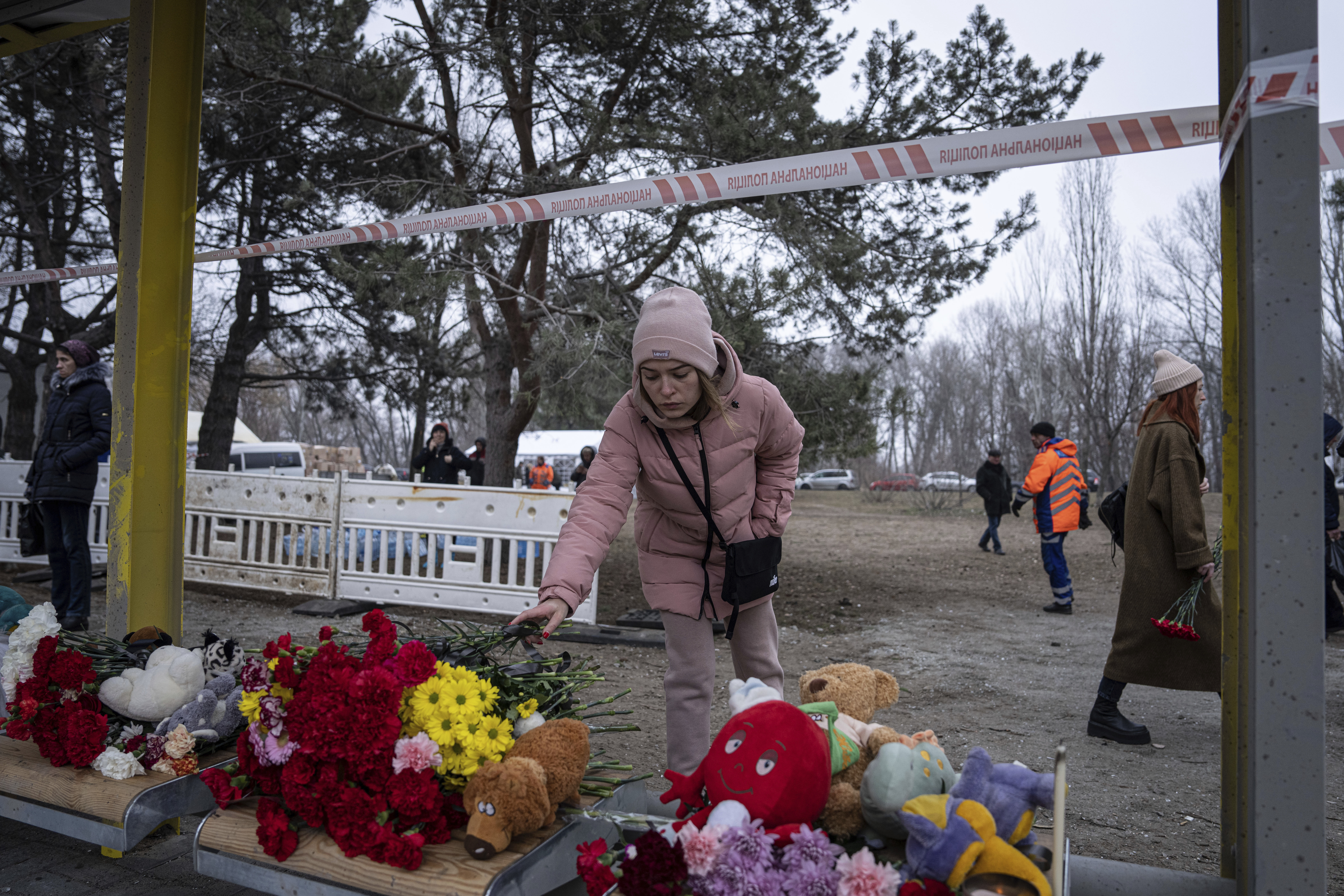 People converged at the site Tuesday to lay flowers, light candles and bring plush toys. For a third day in a row, Dnipro resident Oleksandr Pohorielov came to mourn.

“It’s like coming to the cemetery to your family. It’s a memory, to say a proper goodbye. To remain a human after all,” he explained as an intense reek of burning emanated from the building’s ruins.

Volunteers helped Nadiia Yaroshenko’s son escape from their third floor apartment on a makeshift ladder but their white cat Beliash refused to leave. He remains in his favorite place at a window that is now blown out, Yaroshenko said, desperately trying to see him from the courtyard with a flashlight.

“We cannot reach the apartment even with rescuers because the apartment is in an emergency and dangerous condition. Walls could collapse there every minute,” she said.

The latest deadly Russian strike on a civilian target in the almost 11-month war triggered outrage. It also prompted the surprise resignation on Tuesday of a Ukrainian presidential adviser who had said the Russian missile exploded and fell after the Ukrainian air defense system shot it down, a version that would take some of the blame off the Kremlin’s forces.

Oleksii Arestovych’s comments in a Saturday night interview caused an outcry. He said as he quit that his remarks were “a fundamental mistake.” Ukraine’s air force had stressed that the country’s military did not possess a system capable of downing Russia’s Kh-22 supersonic missiles, the type that hit the apartment building.

Zelenskyy vowed to bring those responsible for the strike to justice.

“We will use all available opportunities — both national and international — to ensure that all Russian murderers, everyone who gives and executes orders on missile terror against our people, face legal sentences. And to ensure that they serve their punishment,” he said Monday in a video address.

The British Defense Ministry said Tuesday that the weekend barrage of long-range missiles, the first of its kind in two weeks, targeted Ukraine’s power grid.

The Kh-22 was designed during Soviet times to strike enemy ships. It can also be used against ground targets, but with much less precision. Observers have said that Russia has increasingly used older weapons, including those intended for other purposes, to attack targets in Ukraine in what could be a sign of the depletion of Russian stockpiles of modern precision weapons. The U.K. ministry noted that the Kh-22 “is notoriously inaccurate when used against ground targets as its radar guidance system is poor at differentiating targets in urban areas,” suggesting that might have been a factor in the deaths in the Dnipro.

Similar missiles were used in other incidents that caused high civilian casualties, it said, including a strike on a shopping mall in Ukraine’s central city of Kremenchuk in June that officials said killed more than 20 people.

The deadliest attack involving civilians before Saturday was an April 9 strike on a train station in the eastern city of Kramatorsk that left at least 52 people dead, according to The Associated Press-Frontline War Crimes Watch project.

In Moscow, a makeshift memorial to the Dnipro attack’s victims appeared in front of an apartment building, an unusual act in Russia, where even a hint of criticism of the government’s “special military operation” in Ukraine is often suppressed. Amid snow, flowers and toy stuffed animals were laid at the monument of prominent Ukrainian writer Lesya Ukrainka, along with a photo of the destroyed building and a sign that read in Russian: “Dnipro. 14.01.2023.”

Attacks on civilians have helped stiffen international support for Ukraine as it battles to fend off the Kremlin’s invasion. The winter has brought a slowdown in fighting, but military analysts say a new push by both sides is likely once the weather improves.